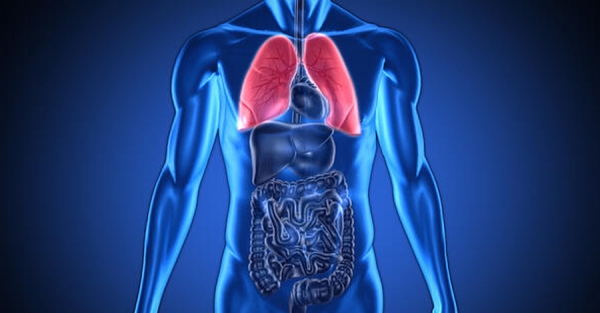 Digital blue human with highlighted red lungs on dark blue background. At our ASMS breakfast seminars, Jean-François (Jef) Focant, Head of the Department of Chemistry and Director of the Organic and Biological Analytical Chemistry group at the University of Liège, Belgium, spoke about using our Pegasus® BT 4D and Pegasus® GC-HRT 4D for GC×GC-TOFMS on the breath of asthma patients to improve asthma treatment. Before diving into the blood and sputum, Jef first educated us on the importance of optimizing your data. 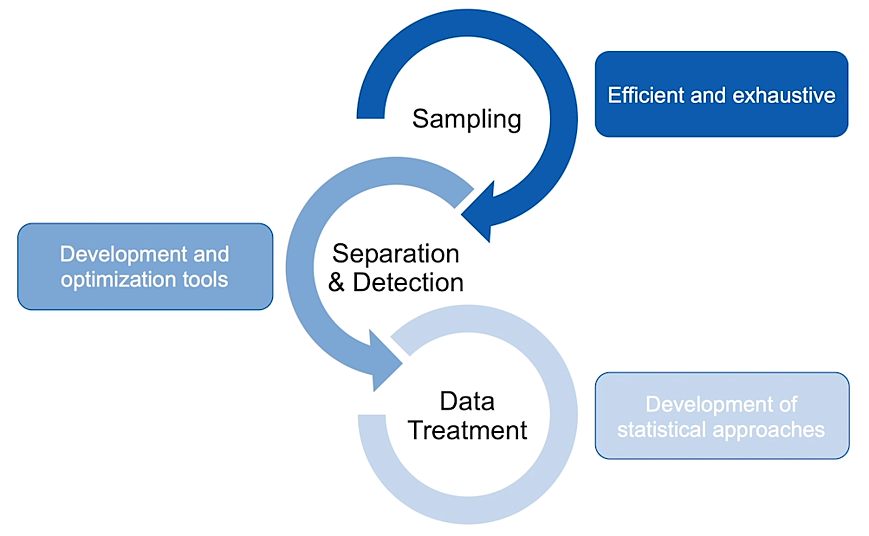 For every clinical project Jef's group studies, there are three "pillars" to the project. First, samples must be obtained. Then, the samples must be run through a mass spectrometer for separation and detection. Finally, the resulting data must be appropriately treated to yield useful and intelligible results. While Data Treatment used to be the smallest of the pillars, advancements in LECO's technology means that so much data is produced, it has become vital to slice it thinner and more manageable.

"Because when we go to the hospital and we speak with our colleagues, they don't really care if I start to tell them 'Oh, the modulation period was 4 seconds, the acquisition speed was 250 hertz...' they say 'Yes, yes,' because they are polite, but they just don't give a sh** to that. They just want to know: is it a positive sample or a negative sample?"

When dealing with patient care, minimizing false negatives or false positives is crucial to providing the proper treatment. Each of the three pillars plays a critical role in this process.

All results begin with acquiring a sample. There are multiple ways of obtaining a sample from an asthmatic patient, but many are considered "invasive" procedures, such as collecting blood or sputum, bronchoalveolar lavage, bronchial brushings, and bronchial wall biopsies. In contrast, collecting breath condensates in a Tedlar® bag is a relatively quick and painless method to obtain a patient sample. It is easy to explain to a patient as well: Here is a bag, please blow into it.

Once a sample is obtained and brought to the lab, LECO's Pegasus® BT 4D can separate and detect the hundreds of thousands of compounds within the sample. Here is where many people go wrong, Jef says. 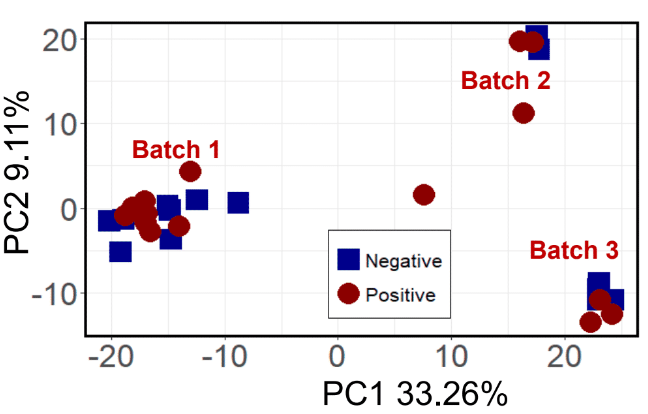 "You have to be sure that you can use good data. It's, again, a drawback of GC×GC and TOFMS because the instruments are so good that you can end up having poor modulation efficiency, bad peak shape, and still the system will give you some information. But it will be more difficult for the system to give you good information. So having good peak shape, good peak intensity, good separation is always very important."

After the data has been processed, statistical treatments can be applied. Before testing asthma patients, Jef's group first ran some experiments using a test group of lung cancer patients and a control group. They wanted to first determine if it was even possible to use breath condensates to determine the health of the patient. The first data treatments did result in some separation between the groups, but they ended up with three distinct groups instead of two. They were able to determine that the environmental VOCs had actually been detected amid the cancerous VOCs, and the three groups were actually the three different times of the year which samples were acquired. While fascinating, this was not the intended outcome.

By applying the samples to the high-resolution Pegasus® GC-HRT 4D, Jef could further drill down into the compounds he was using as markers. 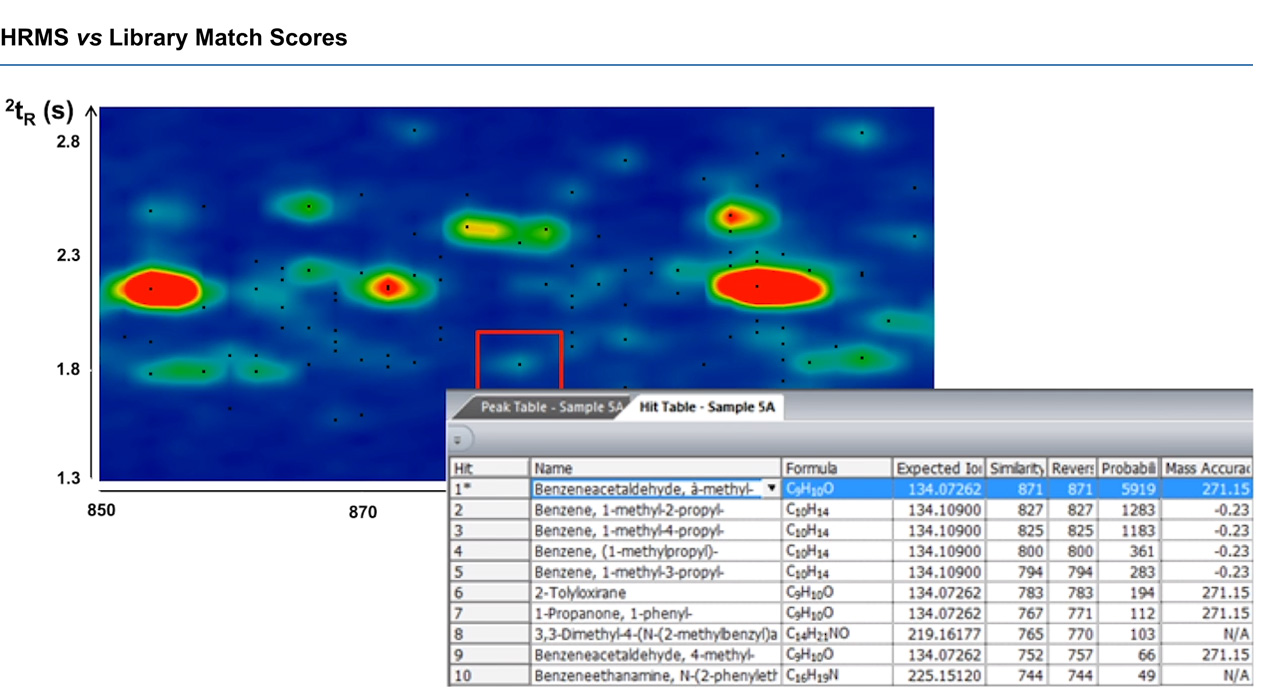 As seen above, the marked peak initially looks to be Benzeneacetaldehyde, with a library match score of 871. However, the high-resolution mass spec allowed Jef to see that the mass accuracy was an incredibly poor 271.15 ppm, whereas the next likely result, Benzene, with a similarity of 827, had a much better mass accuracy of -0.23 ppm. By using the two instruments in tandem with each other, Jef was able to get much better chemical information from his data.

These experiences followed Jef into an asthma breathprint study. With a 200% increase in cases over the past ten years, asthma affects more than 334 million people worldwide, and 14% of children under the age of 18. It is a growing problem, and yet 20% of asthma patients are prescribed the wrong medicine.

As stated earlier, many of the methods to diagnose asthma are invasive, and they have a 67–72% accuracy rate. Jef's group took on the challenge of taking breath condensates from asthmatic patients to see if GC×GC-TOFMS could come up with a more viable diagnosis. To find out his results, check out his breakfast seminar recording from this year's ASMS in its entirety here.