The DH603 determines the amount of residual (total) hydrogen—or diffusible and residual hydrogen with the optional piercer—in iron and ferrous alloys with a single instrument. The determinator features a user- friendly operating system and advanced furnace control.

Residual (total) hydrogen determination involves placing a pre-weighed sample into the furnace, allowing the hydrogen to be evolved by hot extraction into the flowing gas stream. Samples may be collected using a LECO vacuum pin tube or a similar technique. The hydrogen content is measured by a thermal conductivity detector. Final results are displayed in parts-per-million.

Diffusible and residual hydrogen determination involves placing a sampler in the optional piercing unit, which punctures the sampler, allowing the diffused molecular hydrogen to be purged into the carrier gas stream. The hydrogen is measured by a thermal conductivity detector. The sampler is then removed from the piercing unit and the outer shroud is removed, exposing a pin sample for residual hydrogen analysis. The sample is then weighed and placed into the resistance furnace, allowing the residual hydrogen to be introduced into the carrier gas stream by hot extraction. The hydrogen content is measured by a thermal conductivity detector. Final results are displayed in parts-per-million. 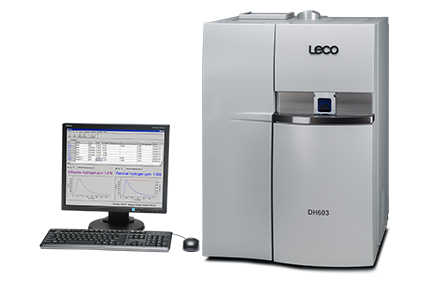